Meghan is also a fellow blogger that I have been following for quite some time now! Check out her favorite games of 2022 below!

For me personally, this past year has been a strange one for gaming. I’ve gone through periods of playing something obsessively for hours, days, and weeks on end – then playing nothing at all. There were a ton of contributing factors – nothing is ever simple, innit? – like lack of time, lack of energy, lack of money, lack of will to live. All the classics. But regardless, I did play through several titles last year that stood out to me, and really made my gaming year. Not all of them were new (i.e. released in 2022) but when I played them, they meant something to me, so of course I am bound by contract to ramble about them.

Figured I’d get this one out of the way first. You all knew it was coming; I’m nothing if not predictable. Elden Ring was really everything I wanted it to be – equal parts gorgeous and terrifying, immersive, and yet, still managing to hit all those classic FromSoftware targets (you know, the trolling, sketchy NPCs, methodical combat) that I love. But everyone knows this already – I mean, Elden Ring won Game of the Year at the Game Awards (shoutout to Bill Clinton? I guess?) and was universally well-received. But none of these things made this title one of my favorite experiences of the year. The thing I loved the most about Elden Ring is another FromSoft staple: the community element (which is often overshadowed by the much more boring difficulty discourse). 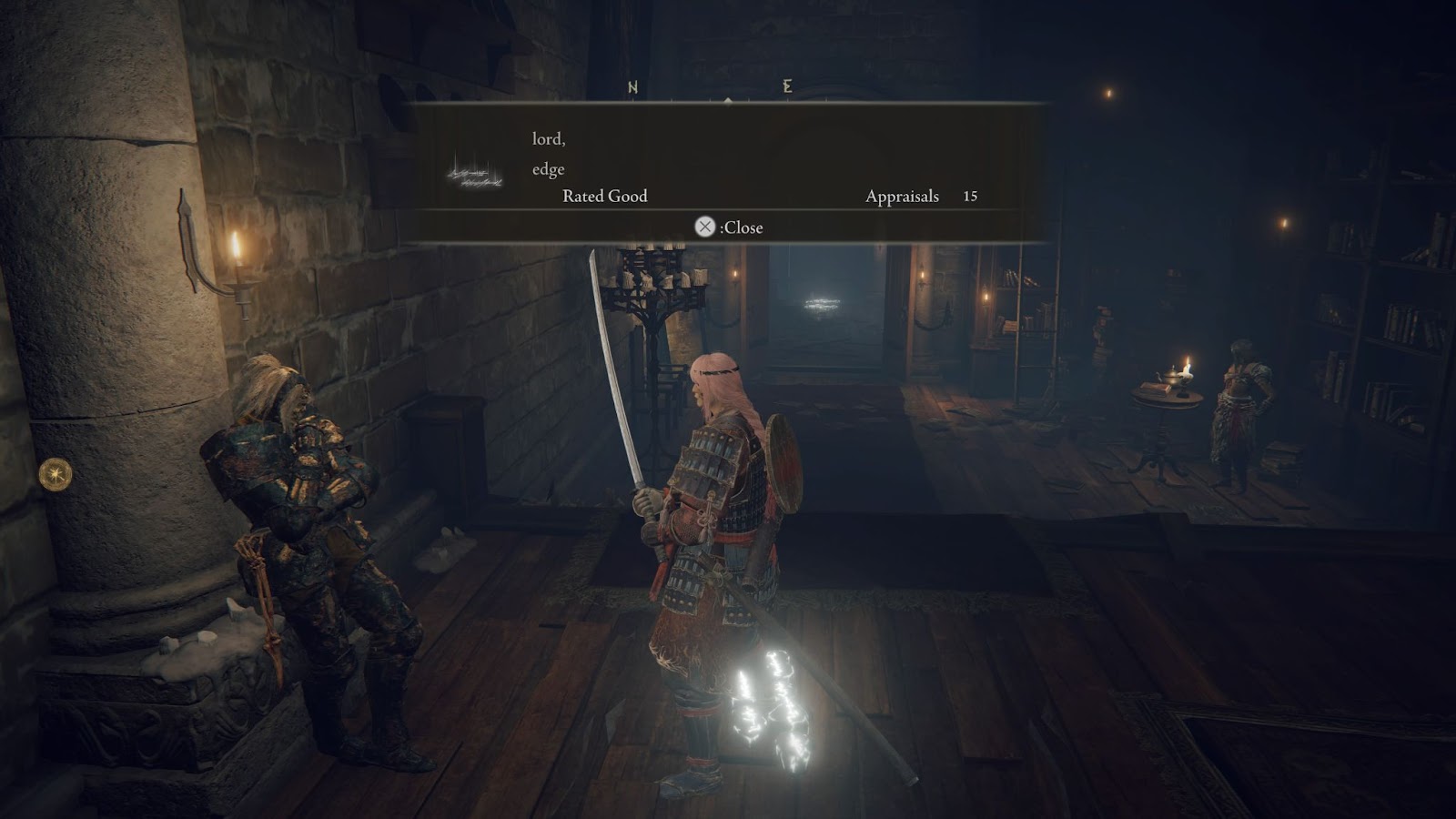 There’s nothing quite like experiencing a game at the same time as everyone else – the feeling of discovering things as a community, sharing tips, and comparing experiences. And for some reason, this period felt particularly exciting for Elden Ring. This went on for months after its release – my entire Twitter feed was all Elden Ring, all the time (I imagine this was quite irritating for people with no interest in the game). For me personally, this game was 50 times more fun because of the people I got to experience it with – Fellner, Nathan, Kate, her lovely partner, Eric, and everyone else who had to suffer through my endless rambling about this title. Even after 140 hours of playtime, I still haven’t completed my first playthrough; not for lack of desire, but simply for lack of motivation. However, this game compromised a huge chunk of my 2022, and I’m so grateful for all the time I had with it – both solo, and with friends.

I have to give a shoutout to my second favorite Nintendo Switch release of this past year – I thought this recent Kirby classic was phenomenal. I wrote a whole article on how I felt that the puzzle elements of this game were exceptionally well-designed. Kirby and the Forgotten Land felt like a fantastic showcase of how level design works to communicate with the player – not only did it capture the foundations of a video game “language” and puzzle progression in a way that felt approachable for kids and casual gaming fans, it also incorporated some fun elements of exploration and challenge for more seasoned gaming nerds. Yes, that’s right, I said challenge. Hitting those optional goals for each stage was surprisingly tricky – I think trying to beat Sillydillo in the Sleepless Valley without taking any damage took me more attempts than some FromSoft bosses. Ya girl was struggling, I’m not gonna lie. 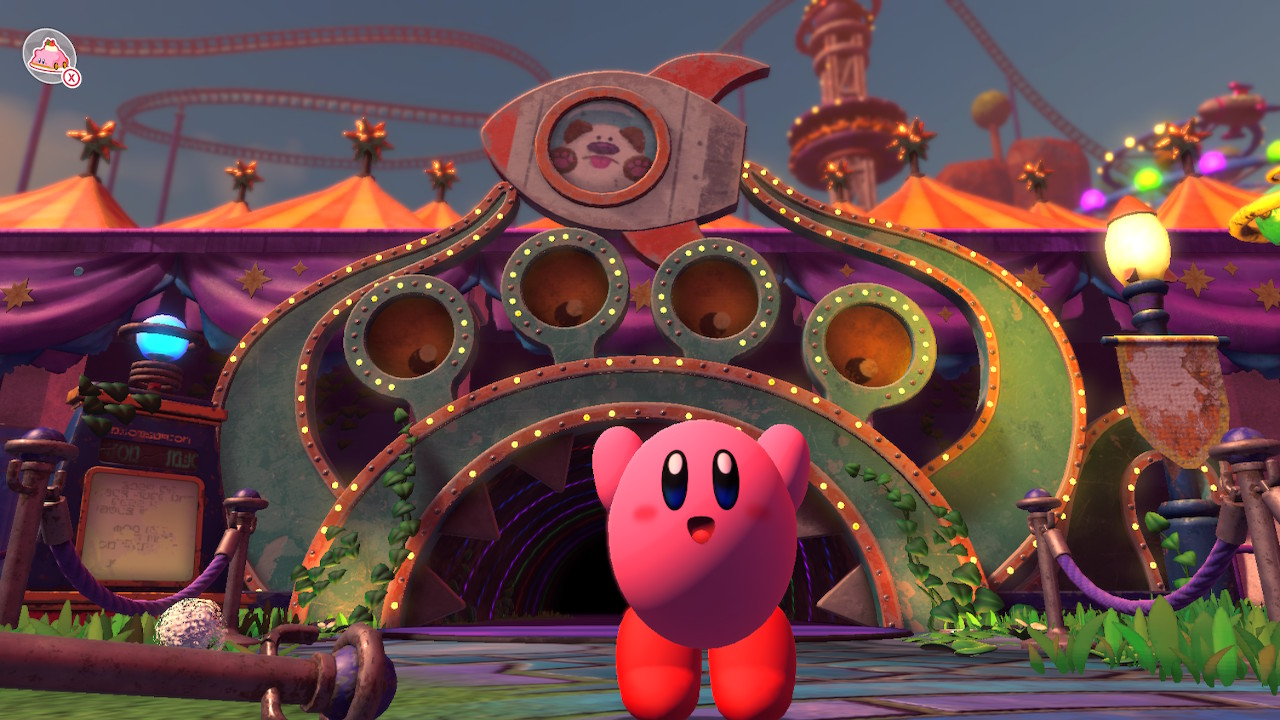 But seriously, more formal praise aside, this game was just so darn cute. Everything is colorful, bright, and genuinely adorable. And let’s be honest, Mouthful Mode was truly an inspired design choice. Chef’s kiss. Mechanically, it did add some really interesting options for both exploration and puzzle solving – 10/10, would love to inhale a vending machine again. I’m happy to play any future Kirby titles if The Forgotten Land is an indicator of things to come.

Okay, so obviously Ooblets was gonna be my favorite Switch release of 2022. I love literally everything about this game. The farming and cooking aspects, decorating your home, talking to all the wonderful NPCs, and of course, collecting all the adorable Oobs. The hilarious dialogue and general writing in this game are completely unmatched and genuinely made me look forward to speaking to all the Badge-townies each day (normally, I’d consider this to be a bit of a chore). This is still my go-to game when I’m feeling low energy (i.e. quite often) and I still enjoy putting hours into it every time I pick it up – those gleamies aren’t going to find themselves, after all. 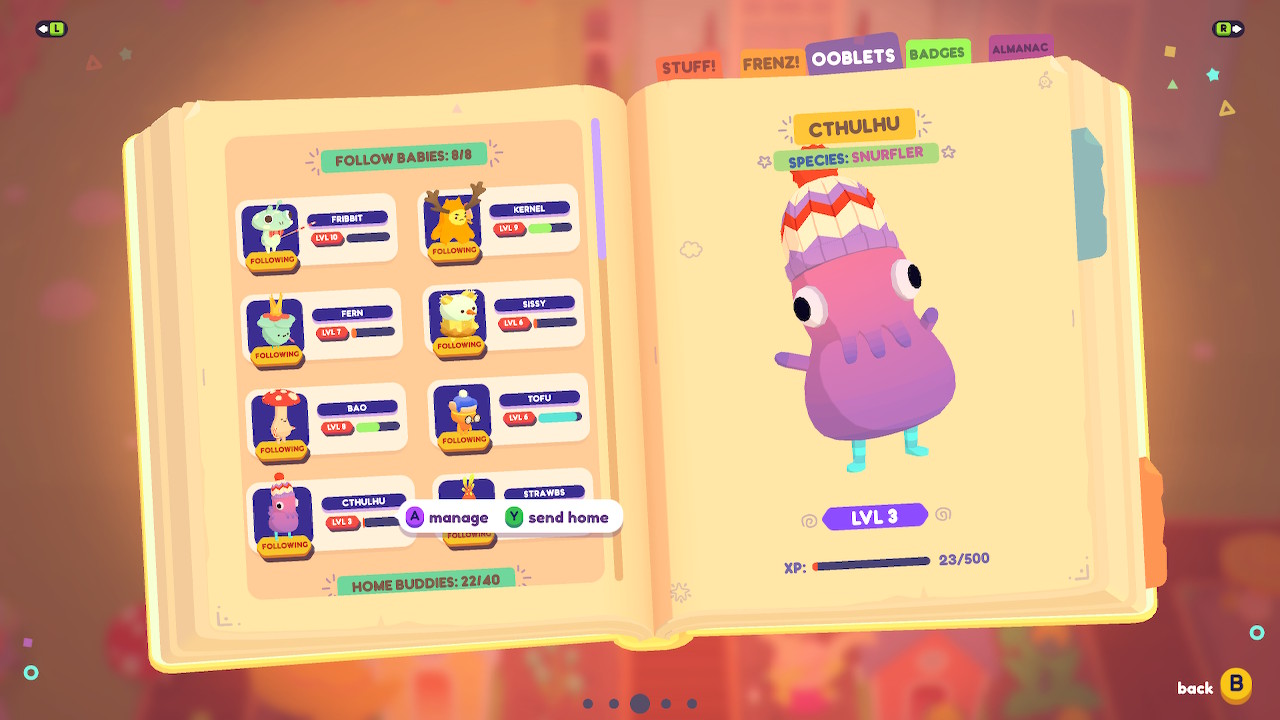 And while there is a storyline to Ooblets and official quests to complete, it’s also a game where you can completely ignore everything and simply play. If you’re like me and tend to ignore story-questing in favor of side-questing, boy has this game got you. It’s quite appealing to my pea brain, honestly. I’m totally content to try my hand at dance tournaments in Badgetown, sea-dangle (aka fish) in Port Forward for some recipe ingredients, or help the different Oob fan clubs with their requests – all without ever touching my main objectives. The developers behind this title have also continued to push holiday updates, which I’ve enjoyed immensely – both the Halloween and Winter events were beyond cute. I hope they continue to work on Ooblets into the new year, as it’s not a title I want to give up any time soon.

In case it wasn’t already obvious, given my love for games like Pikuniku and Ooblets, I am truly obsessed with games that have funny, off-the-wall dialogue and storylines. The Frog Detective series is exactly my cup of tea – the writing in all three games is brilliant. They have that Adventure Time-esque charm, with unexpected, and usually hilarious, lines from all the wonderful characters. Have you ever imagined becoming invested in a Koala’s dream to find a magnet so they could attach it to a boat, hold on to said magnet, and therefore go really fast? Or being extorted by a rhino looking to pursue her dreams of becoming a famous singer? EXACTLY. I’m going to assume I’ve sold you on this series already, so you’re welcome. Also, you’re a frog solving mysteries. I don’t really know what more you could ask for. 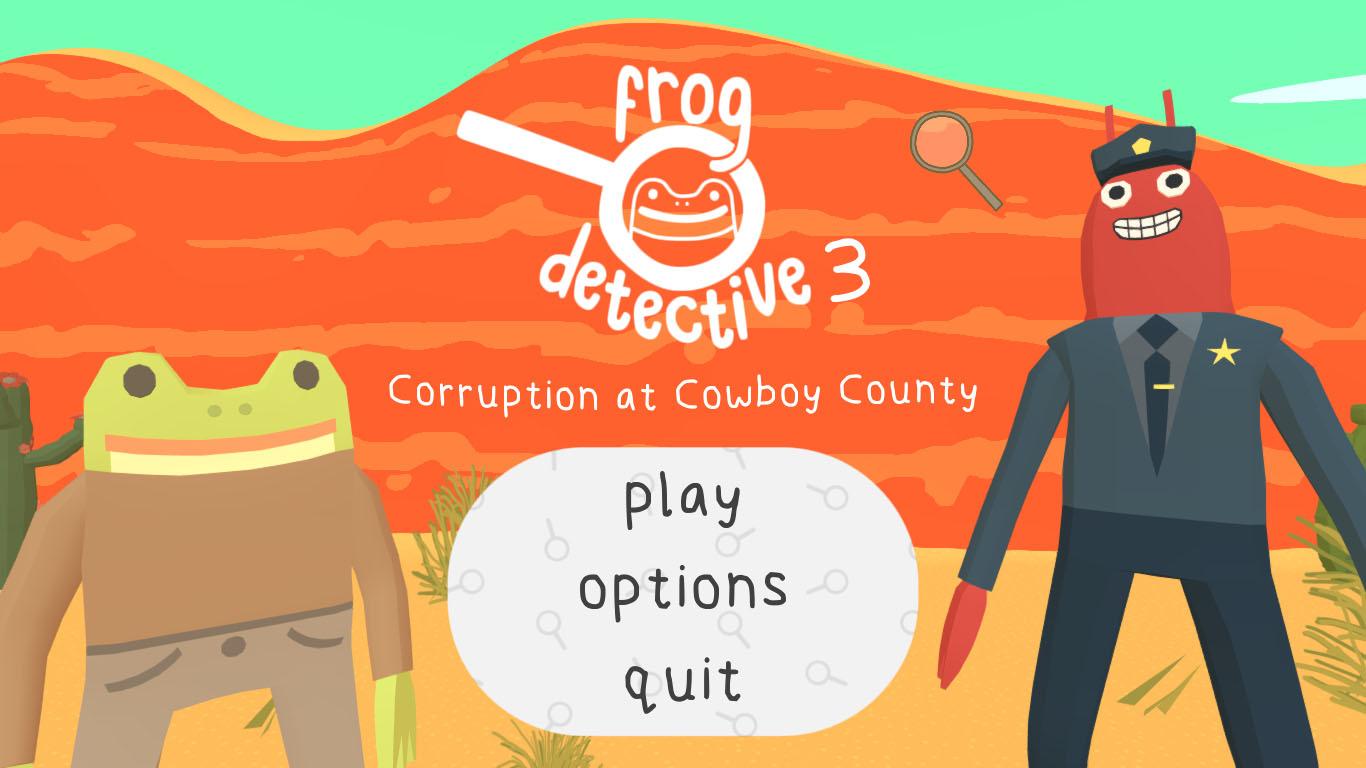 I really loved Frog Detective for its objective brilliance and quirky concept, but I also happened to play these games with a friend, which made the experience at least 137% better. Because these games have no voice acting, I convinced (extorted? You’ll never know) a friend to do silly voices for all the characters with me. Though obviously the game is intended for a single person, I’d highly recommend playing with a friend or partner and doing exactly this. Unfortunately, with the release of the third game in 2022, this series is officially finished, and in very related news, I am officially depressed.

Though the games in this list weren’t ranked, I think it’s safe to say Dead by Daylight was my number one game of 2022. For anyone who follows me on Twitter, I’m sure this is no surprise – I’ve been obsessively posting clips from all my DbD adventures these last few months. Sorry. Thanks to a group of friends who are die-hard (Dead Hard?) fans of the game being kind enough to show me the ropes, I got SUPER into it. Because Dead by Daylight is deceptively simple – you work on some generators, you avoid the killer, you power those exit gates, and flee like your life depends on it (because it does). But when you add in the different characters and all their perks – of which you can equip four – the item offerings, killer meta, and general-know-how, there’s a lot to learn. Like not fast-vaulting over obstacles everywhere and alerting the killer to your location. Sorry team, I did this a lot when I was first learning. Or, knowing which killers are likely running certain perks – maybe think twice before cleansing that Hex Totem while facing the Spirit, and inflicting your team with the Exposed status by activating Haunted Ground. Then again, we all know the ancient adage – “if it glows, it goes.” 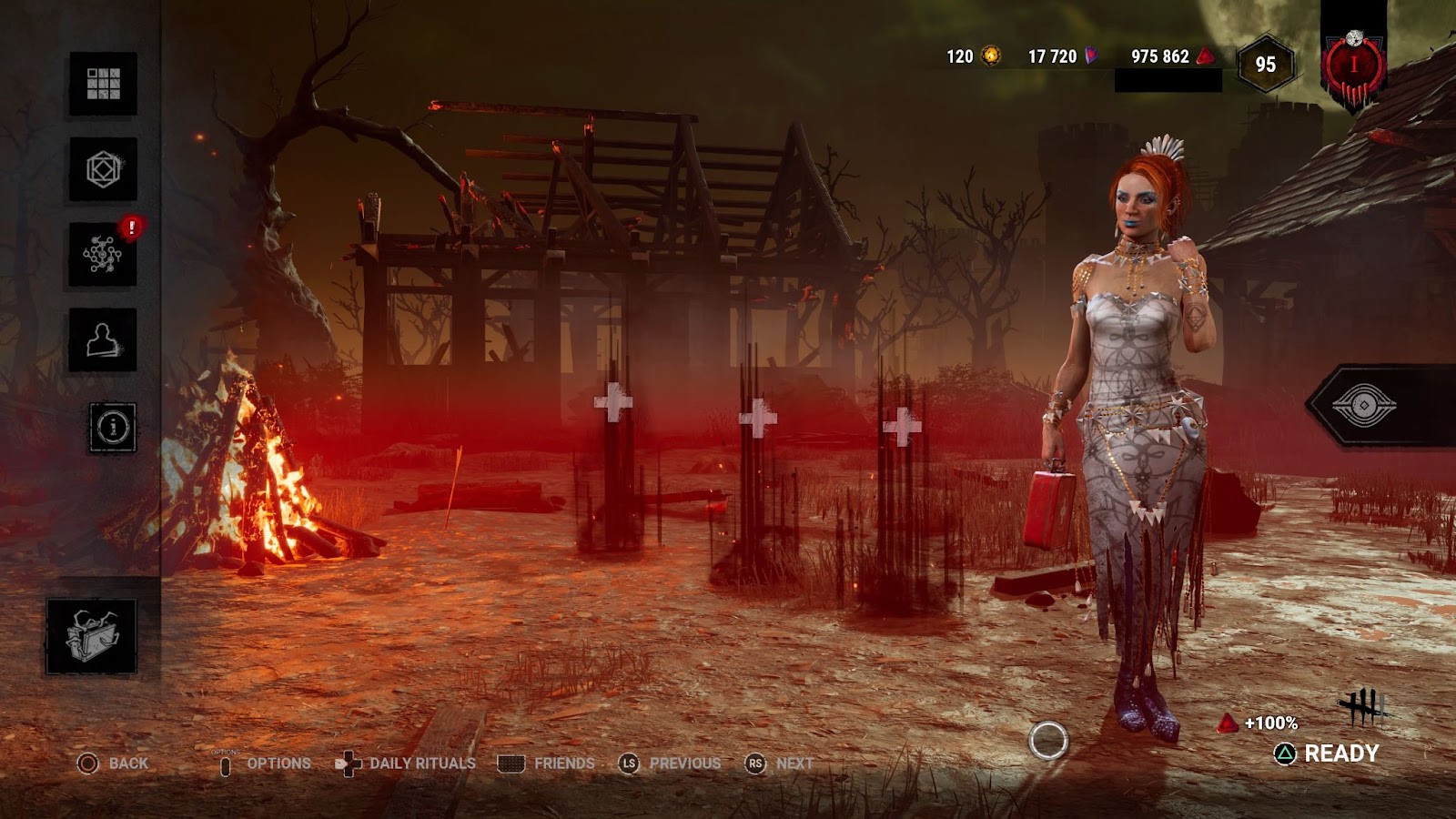 Though I have been known to get quite salty when killers are being poor sports (camping hooks, and tunneling survivors) I do enjoy the game a lot. Each match feels like a unique experience, with the variety of maps, killers, and ways that a game can ultimately play out. There’s nothing more satisfying than styling on a killer (especially with a cheeky flashlight or flashbang save) and getting all four survivors out of a tricky endgame. Or, managing to find the hatch when a particular match has gone exceptionally poorly. It’s been a whole experience learning the ins and outs of this game, but I’ve had fun with it every step of the way. No other title has given me the highs and lows, excitement and horror, joy and suffering that Dead by Daylight has. Truly, the Entity Yeeteth and the Entity Yoinketh are in (mostly) equal measure. I don’t imagine I’ll be giving up on Dead by Daylight anytime soon, so onward to more deaths in 2023!

Check out more of Meghans stuff here on Twitter!

Check out her blog here!